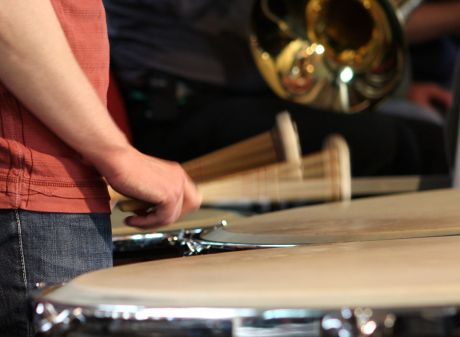 The constant strain in the often very unusual posture typical of the instrument causes in many musicians complaints of bones, muscles or joints. The experts in the Berlin Center for Musicians Medicine offer a variety of treatment methods and make appropriate prevention offers.

Diseases of the Musculoskeletal System

Pain of the movement system is one of the most frequently occurring complaint of professional and amateur musicians (Other terms are acute musculo-skeletal overload syndrome, overuse syndrome, and chronic, load-dependent myofascial pain syndrome).

The musculoskeletal congestion syndrome usually occurs in the upper extremity and is characterized by an initially reversible, localized pain with movement restriction during music making. In chronic myofascial pain syndrome, there are load-dependent dull pains with changing localization over a period of at least six months and they are often associated with an anxious-depressive mood.

Both diagnoses are made clinically, additional laboratory and imaging examinations may be useful to exclude other diagnoses. Pathophysiologically, chronic pain is due to dysregulation that develops over a long period of time, with a lowering of the pain threshold and over-excitability of the pain path.

Therapeutically, a break should take place early, which can be several weeks in case of chronic pain, as well as physical measures (heat and cold application) and if necessary physiotherapeutic treatment. In addition, a drug treatment with non-steroidal anti-inflammatory drugs, and muscle relaxants. In chronic pain a treatment can be initiated with amitryptiline that raises the pain threshold. In the context of a multimodal treatment concept, numerous other measures can be taken, such as balance sports, movement and relaxation techniques (e.g. Alexander technique, autogenic training), psychotherapy and the mediation of a good "hygiene" (warm-up and cool-down before / after performance, fractional practice with breaks, mental practice). After the symptoms have resolved, the musculoskeletal system should be carefully rebuilt by using the instrument.